The Mighty Point and Shoot

It's been too long since my last blog post. I'm blaming that fact on a busy summer, working, boating, diving and shooting. But my recent vacation has me thinking about how much I love using a point and shoot camera. For the first time I went on vacation without a DSLR or laptop, replacing both with my Canon G12 and Samsung tablet computer. With three young children I wanted to save some space in the car, and frankly, wanted a break from "serious" shooting.

It's easier to carry a point and shoot.

But make no mistake, you can do some serious shooting with a point and shoot. There is an old saying that the best camera made is the one you have with you. And with a smaller point and shoot camera one can have a capable camera anywhere. They are easy to slip in a pocket, purse, almost anywhere.

There are often times I wish for my DSLR and full frame sensor, but when I'm with my family I try hard not to turn the event into a photo shoot. At the same time I do want to record the event. Because to me, there are few pictures more important than family photos.

Let's face it, that incredible sunset photo you have is likely to get tossed in the bin when you're kids and grand children are sorting through your belongings after you've passed away. But the photo you took of your child catching his first fish

Finn with his first fish.

will be treasured. A good point and shoot is really the Swiss Army knife of cameras, capable of most everything, just not always the best tool for the moment.

But most do have some great tools. I shot the pano of the Surf Ballroom, the site of Buddy Holly's last performance, using the built in pano settings on my G12 to help me line everything up. Granted I could have shot this easily with my Canon 5D MKIII and a wide lens, but I didn't have it. 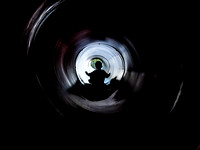 Finn comes down the long slide.

The girls on the wave runner. Shot from another wave runner. I put my G12 in a waterproof bag and stored it on the PWC, ready to use when needed.

It's harder to shoot quickly with a point and shoot as most do have a delay while the camera takes its' time to focus and shoot. But with some foresight one can still capture spontaneous moments. It's important to pre-focus to help speed up the shutter release delay. It's also important to be able to shoot in manual mode or quickly be able to use the exposure compensation so you can get the desired exposure.

I do carry a small external flash for my G12, but use the built-in flash quite often. I also shoot lots of video with this camera. It's easy and simple. I take it with me everywhere and with an SD card such as an Eye-Fi or Toshiba Flashair card I can pictures on my phone and post to social media sites quickly. Many point and shoots now have wi-fi built in which is a huge plus.


My G12 is getting long in the tooth and has me thinking about an upgrade. I'm tempted to go with a mirror-less system with interchangable lenses but those are more expensive and again, not as easy to carry. And what I like most about shooting with my G12, or any point and shoot, is how unassuming it is to use. 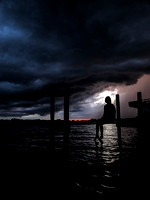 People pay less attention when you are using it. It's small and quiet. I can still enjoy family time without it feeling like a photo shoot. But it is fully capable when I want it. And more importantly, it allows me to blend in with the background and capture special moments just like a pro. Because being a pro photographer is not about your gear or how you look, it's about how you think, see and shoot.