First Charter of the Season

Thanks to a rare open Sunday this year I was able to kick off the dive charter season May 25th with a pair of dives from Rec and Tec Scuba Dive Charter's Sylvia Anne in Lake Huron's Sanilac Shores Underwater Preserve. Coincidentally my first charter last year was also May 25th but up in the Straits of Mackinac Underwater Preserve. And while these two preserves are quite different in many ways, I'm discovering May 25th is becoming a very good day for me to dive.

In the Straits my first two dives were on the iconic wrecks Eber Ward and Sandusky. The Eber Ward, a wooden steamer, sank in 1909 and sits at 140 feet deep while the schooner Sandusky was lost in 1856 and sits 85 feet from the surface. Yes the water was cold, but the Straits were glass flat and the visibility was stunning, over 60 feet. Both wrecks are must do dives for a Great Lakes diver. 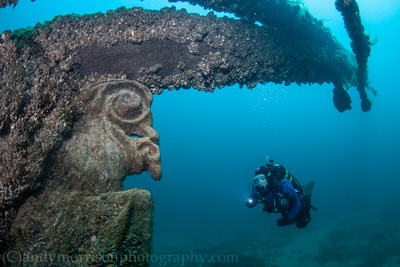 Sitting in 85 feet of water is the brig Sandusky which sank in a storm in 1856. The Sandusky features a unique figurehead. The present figurehead is a replica attached after the original was damaged in a theft attempt. 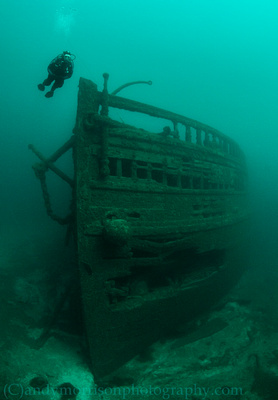 The Eber Ward sank in 1909 in the Straits of Mackinac.

My two dives this year were with with a group of divers from Aquatic Adventures of Michigan on lesser known wrecks but were every bit as epic. Our first dive was on the New York, a steam barge that sank in 117 feet of water in 1876. It's somewhat broken up but there is a really neat oscillating steam engine and part of the hogging arch is still standing. Our second dive was the Col. A.B. Williams, a schooner that sank in 1864 in about 80 feet of water. The mast and cabin are gone but the classic bowsprit makes this a must see. And while the Sandusky is a "sexy" looking schooner with curved lines and a figurehead, the Williams is a great example of a Great Lakes work schooner- simple, tough, straight lines and no figurehead.

What made these two dives this year especially epic though was the visibility. I've been on the New York a couple other times and it sits in a spot of Lake Huron that can be especially dark and turbid. And the Williams is sometimes not much better. But we easily had 60-80 feet of visibility on both dives and there was plenty of light. So I wasn't too bummed when my strobes refused to fire on the New York. It was a great chance to shoot available light. We really got to see these two wrecks in all of their glory, though only divers would call a ship sitting on the bottom glorious. Still, I'm ready to start planning dives for May 25, 2015. 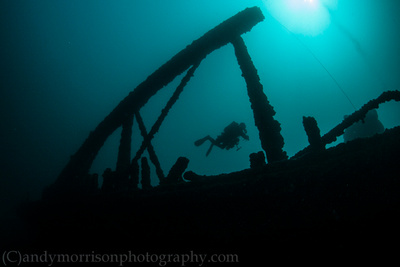 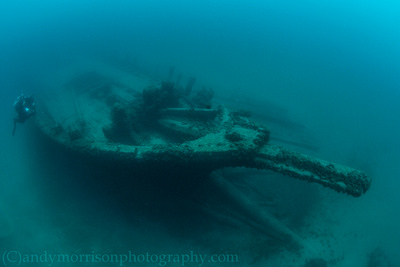 essayontime review(non-registered)
Based on my personal experiences, I can clearly say that photographing a couple in love is not that challenging. However, it is necessary to fulfill certain requirements to keep up the momentum.
paper writing services(non-registered)
Exploring the beautiful and remort parts of sea and capturing significant images is the dream that always fascinates me. I am now getting the training of the underwater photography, so that I could fulfill my dream.
No comments posted.
Loading...
Subscribe
RSS
Recent Posts
Jack's Sparrow The Mighty Point and Shoot First Charter of the Season Contest Season Treasure Diving Getting Ready for the Scuba Diving Season
Keywords
Scuba Diving boating detroit river freighter lake erie lighthouse shipping summer and ballroom
Archive
January February March April May June July August September October November December
© Andy Morrison Photography
Powered by ZENFOLIO User Agreement
Cancel
Continue