Thank you for your patience while we retrieve your images.

It was an elite fighting unit in Vietnam - small, mobile, trained to kill. Known as Tiger Force, the platoon was created by a U.S. Army engaged in a new kind of war - one defined by ambushes, booby traps, and a nearly invisible enemy.

For seven months, Tiger Force soldiers moved across the Central Highlands, killing scores of unarmed civilians - in some cases torturing and mutilating them - in a spate of violence never revealed to the American public. They dropped grenades into underground bunkers where women and children were hiding - creating mass graves - and shot unarmed civilians, in some cases as they begged for their lives. They frequently tortured and shot prisoners, severing ears and scalps for souvenirs.

A review of thousands of classified Army documents, National Archives records, and radio logs reveals a fighting unit that carried out the longest series of atrocities in the Vietnam War - and commanders who looked the other way. For 4 1/2 years, the Army investigated the platoon, finding numerous eyewitnesses and substantiating war crimes. But in the end, no one was prosecuted, the case buried in the archives for three decades. Until Now. Winner of the 2004 Pulitzer Prize for Investigative Journalism 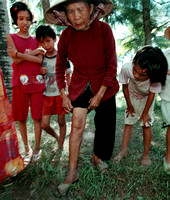